Valdivia was also victim to the 1960 Earthquake and many of its buildings were severely damaged in the event. The Earthquake, the most powerful ever recorded, at a magnitude of 9.5, generated Tsunamis that affected Japan and Hawaii.

By 1974, Valdivia was declared a province of the Los Lagos Region with Puerto Montt as the regional capital. Many Valdivians resented the decision, and felt theirs should have been the legitimate regional capital—while Valdivia was founded in 1552, and had resisted pirate attacks, hostile natives and several earthquakes, Puerto Montt was a relatively new city founded only in 1853 (three hundred and one years later).

Walking around the town, the German influence is apparent- the typical German architecture and Beer!!! As is Valdivia's high society. Several rivers such as Cau- Cau, Calle- Calle and Cruces, are very famous as they join near the city forming the larger Valdivia River. 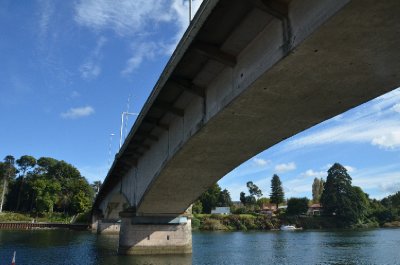 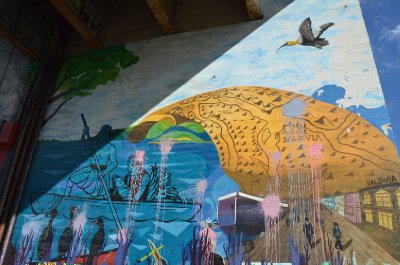 Under the River Call- Calle Bridge

I love the history of this town, but in all honesty, the reason why I've come to Valdivia is to see their most famous attraction of all- Los Lobos Marinos. At first I thought- WOW- sea wolves and then on closer inspection.... I realised it was the all too cute mighty Sea Lion.

I've come to realise that Lobos Marinos own this town!!! They are absolutely everywhere- sunning themselves, taking a dip in the water, hanging around the fish market for food, playing with the stray dogs, grooming eachother.... apparently they even cross the roads hahaha!!! 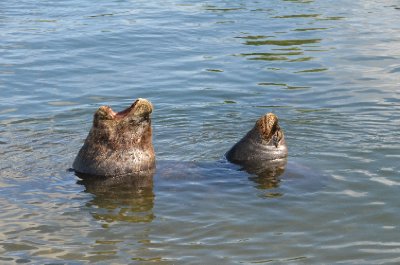 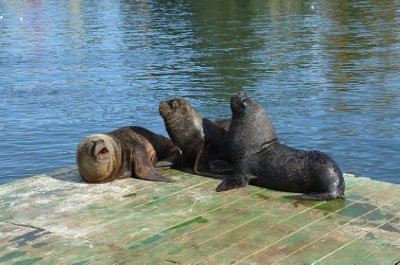 Look at them all hanging out... 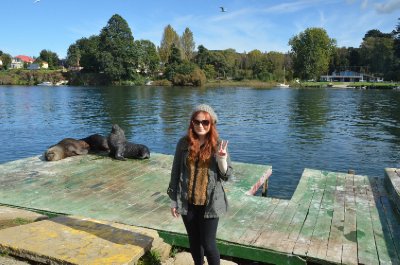 Me and my new little Lobo Amigos

As we were watching a group of them, a stray female Lab mix started barking at them. She decided to jump over to the resting stand they were all tanning themselves on and continued to bark. One Lobo got up and with his enormous size, must've freaked her out alittle, as she backed down and started to run away from him. She couldn't figure out how to jump across back to the bank, so every opportunity she got she would run in front of him and then attempt to jump from the rest post to the bank. On her 5th attempt she made it safely across. Just to get her point across, she barked at the Lobos a few more times before finding her bench and snuggled in for a sleep. 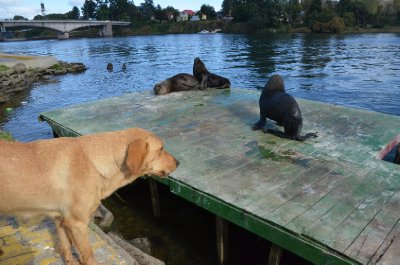 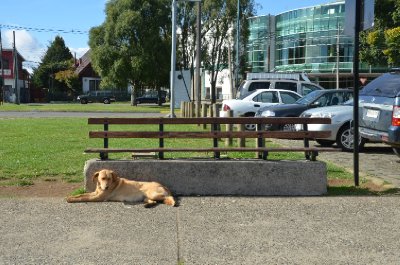 The lab mix that got nowhere with Los Lobos Marinos

After posing with Los Lobos, we walked around the bay before a boat tour company approached us for a 1 hour boat ride around the river Calle- Calle. We figured it would be a great way to see Valdivia from a different perspective and made our way to the tiny boat. Life jackets are a requirement when riding in any water vehicle, so with all our safety gear on and my winter coat keeping me warm, we started our merry little boat ride.

I am not too keen on boat rides, but dad is, so as long as he enjoyed himself, that was the main thing. We were able to see more Lobos swimming in the water and various water birds. There was the University, a school, private residences and companies which all have the river as their backyards. Alot of Chile's high profile personnel have property in Valdivia and we got to have sneak peek at the locations. 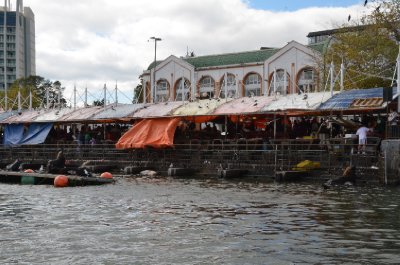 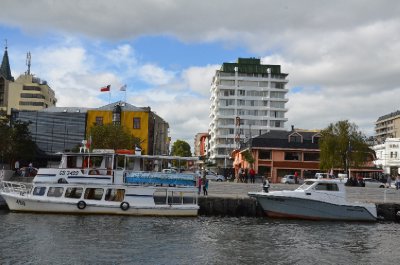 View whilst on the boat ride... 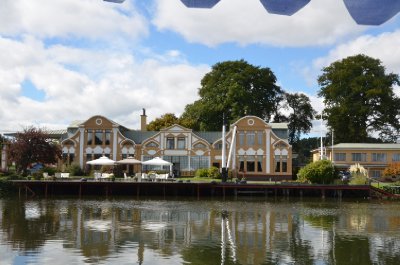 Buildings along the River Calle- Calle 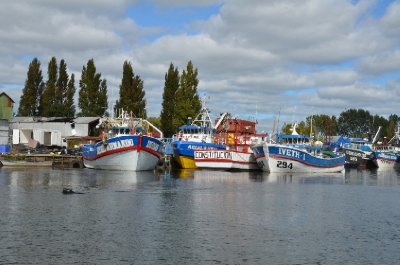 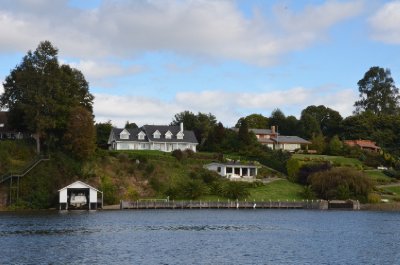 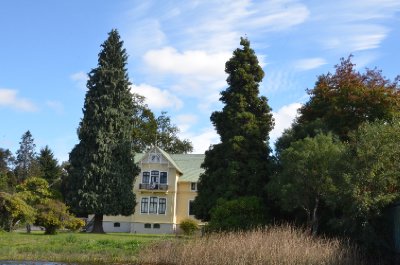 Cutesy house, although I think it's a college... 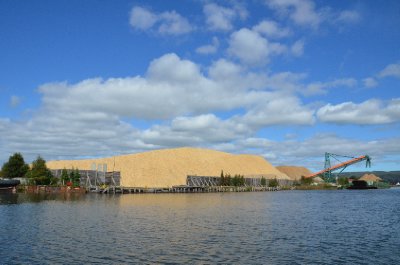 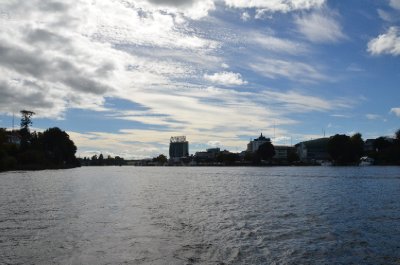 The view from our boat 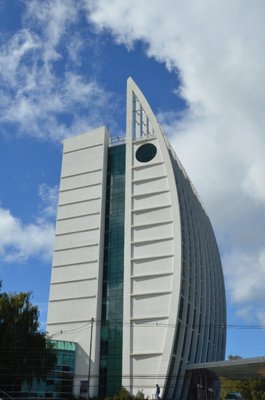 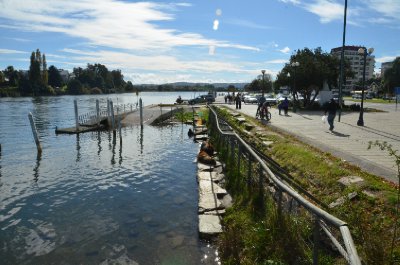 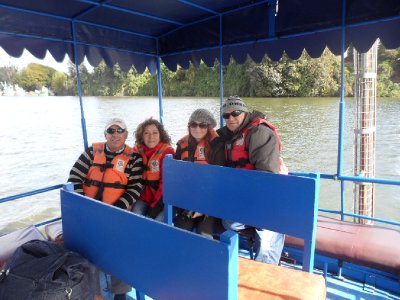 We arrived back to shore around 3pm and as it was time for lunch, we headed past the fish market, where they also had massive sized salmon and found a good restaurant that had various seafood dishes. Lunch was good, we ate salmon a la mantequilla- buttered salmon and god it's delicious. Totally recommend this. It is a very popular dish in seafood restaurants, so you shouldn't have any problems asking for it.

After lunch we headed back to the car as we were going to make our way to Niebla- home to the ruins of a Colonial Spanish Fort and Museum. Before we wen to Niebla, we did a drive by the town of Los Molinos. This is a beautiful little beach town, that has coloured house along the coast. I never imagined Chile had such picturesque towns, especially with ones where the houses are built so close to the cliffs edge. In this area, you will see many of Chile's sea bird called the Jote. At first glance, it resembles a Condor, Chile's national symbol, as it too is black, has a red bald face and quite a big wingspan, but the Jote bird is much smaller in size and does not live in the Andes or Patagonia. 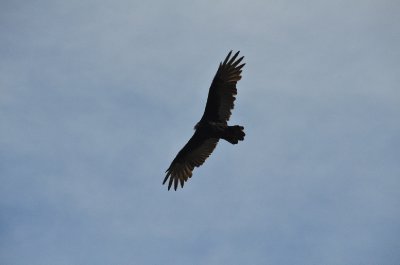 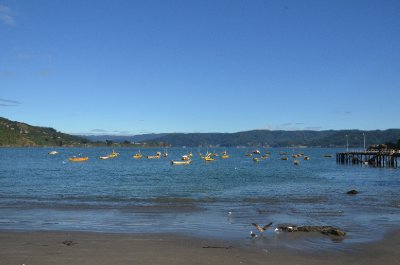 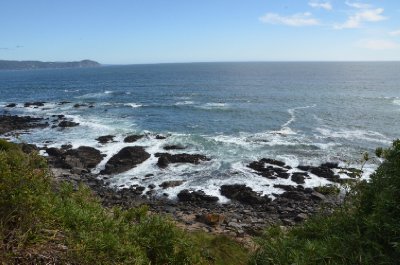 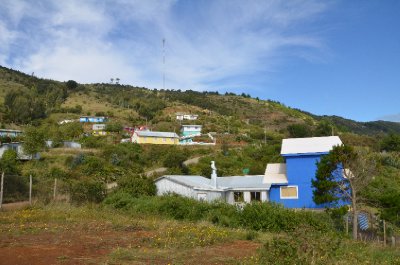 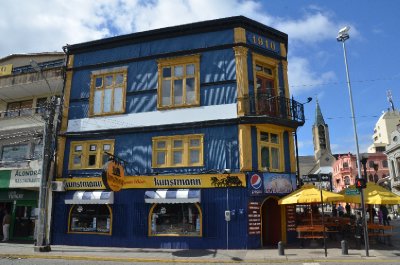 An hour later we arrived in Niebla and the parking guy told us it was free today- we asked why and he didn't know why, so it was win-win!!!
We entered the museum and read the history of the site and walked around looking at the canons, armour, uniforms and weapons that were on display. The dummies they have that display the uniforms are a little freaky... their eyes are so life like. At one stage I bumped into one by accident and said perdon- My auntie just looked at me like I was crazy and laughed.

Dad and me in Niebla 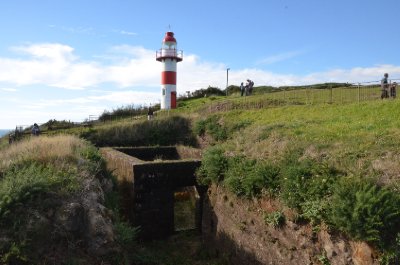 The Lighthouse in Niebla 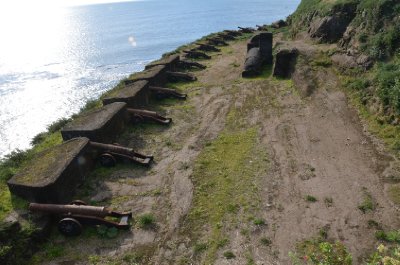 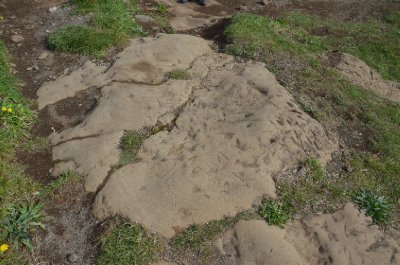 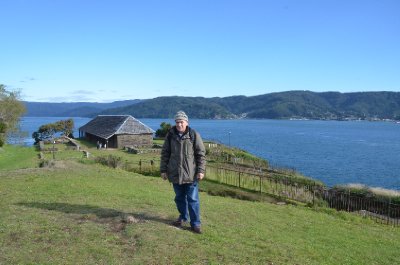 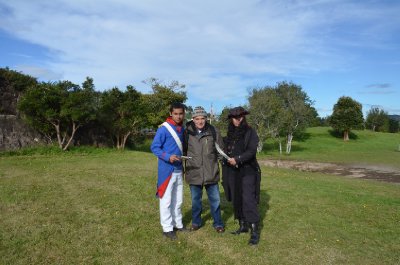 The Niebla museum is only tiny and you can do it well under an hour. I would go there more for the view from the hill where the lighthouse is located and also it would make a really nice afternoon drive.

We saw alot today and I met some really nice wildlife.
x

Posted by chumpette84 16:59 Archived in Chile

Previous Next Table of contents

Comments on this blog entry are now closed to non-Travellerspoint members. You can still leave a comment if you are a member of Travellerspoint.

If you aren't a member of Travellerspoint yet, you can join for free.